Sea of Thieves 2018 is an action-adventure game. The game is developed by Rare, and it is published by Xbox Game Studios. To run the game on your PC, you are required to determine your gaming PC’s requirements. The major concern includes GPU, CPU, and RAM.

After you have your PC specification in your hands, you can compare them to the minimum as well as recommended requirements for the Sea of Thieves that we are going to list below. From there, you will be able to know whether you need an upgraded system or if you are all set to go. So let’s get started!

Details of Sea of Thieves

Details of Sea of Thieves

Requirements for the system: Medium

As mentioned earlier, the game is developed by Rare. It is a first-person action-adventure game with a heavy emphasis on multiplayer where gamers can live out their pirating dreams by sailing the seas, maps for hidden treasures, engage in furious open-sea combat, and encounter all manners of mythical creatures n the process.

Gamers are allowed to play solo in player vs. player or the co-op in crews of up to four players. In a departure from loot-based multiplayer games, each player will be equipped with the same weapons and ships, which means skills will play a vital role in deciding who is the winner and rather than depending on the best types of equipment.

Players will also have an opportunity to participate in voyages and quests to earn gold and upgrade their reputation to unlock cosmetic items. Moreover, there are also various islands to discover, AI enemies to engage in a fight with, and other activities such as fishing and hunting as players vie to become pirate legends.

Sea of Thieves game currently has two modes. The first one is adventure mode, which offers a more traditional take on the game where players set off from one of the several outposts doting the seas and embark on an epic narrative quest.

The second game mode is known as arena mode, where players can take part in structured PvP either as a crew or solo in a delimited area over the course of a twenty-minute battle.

Below are the minimum system requirements for the game; 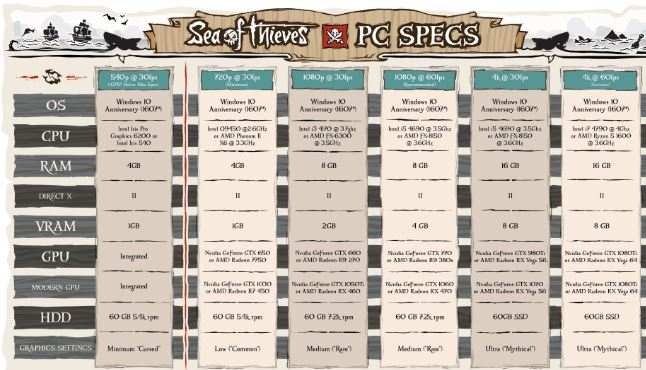 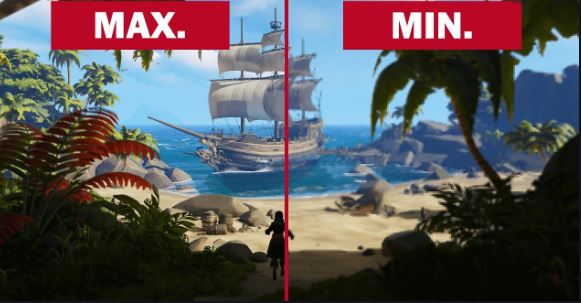 With the minimum requirements, which aren’t that demanding, you can easily run the game at 720p with the settings on low and produce up to 30 FPS. Although it isn’t ideal gaming, it will run the game for you. Gamers can also manage a 30 FPS at 540p by using an Intel Iris Pro 6200 or 540 with an integrated GPU.

Moving towards the recommended requirements, these requirements will allow up to 60 FPS at 1080p while using medium settings, which is significantly much higher than minimum specifications. Core i5 and GTX 1060 won’t break the bank as modern setups surpass them in terms of price and performance.

If you cant manage and your system specifications fall slightly below those of the recommended settings, you do not need to worry because your game will still manage a 30 FPS at 1080p on medium settings while using GTX 1050Ti along with an Intel Core i3 or AMD FX-6300. 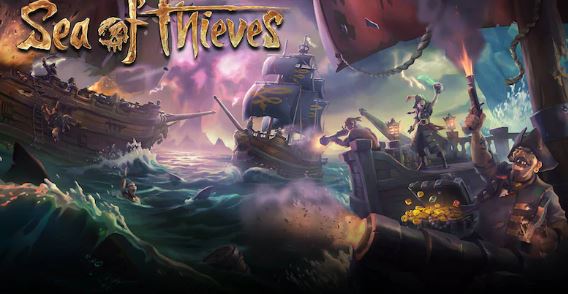 If you still want to experience the Sea of Thieves with all its visual beauty, then you should consider Intel Core i7 4790 or AMD Ryzen 5 1600 paired with an NVIDIA GeForce GTX 1080 Ti and 16 GB of RAM. With these specifications, you will reach up to 60 FPS at 4K with Ultra settings. Below is what is the ideal system for Sea of Thieves, which can go beyond 60 FPS at 1080p or 30 FPS at 4K while settings are on Ultra.

Below are some FAQs asked by multiple users;

Q: Can I play Sea of Thieves for free?